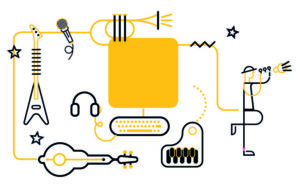 Node is a HUB devoted to developing and supporting creativity in the music industry.

Since its foundation in 2013, NODE has worked to bring the Italian music market closer to the international music arena. To carry these out, NODE has benefited from the financial and organizational support of stakeholders from both the public and private sector, like Regione Puglia, Puglia Sounds – Teatro Pubblico Pugliese and Fondazione Cariplo.